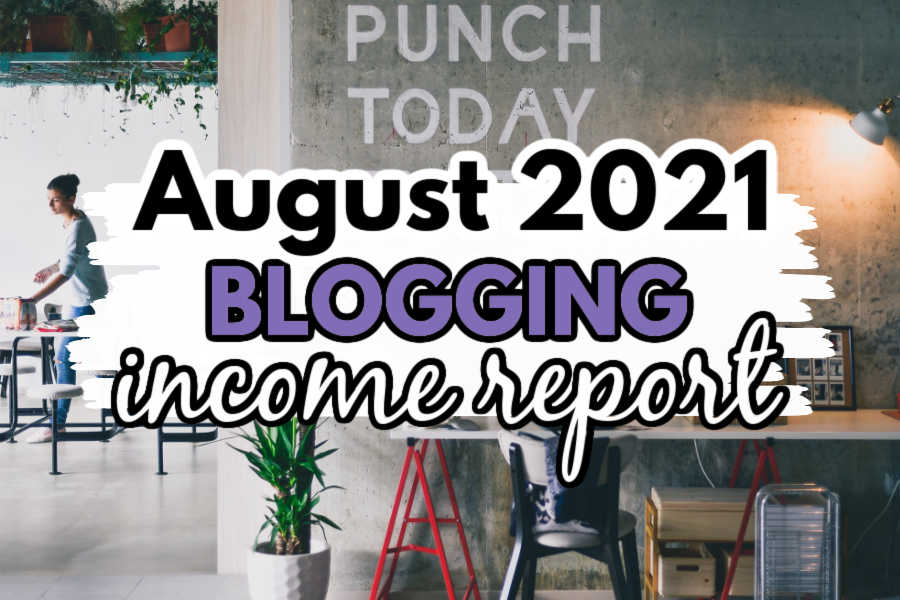 Welcome to my August 2021 blog income report where I share the income and expenses from my small portfolio of sites.

I’ve been blogging since 2016 and I’ve created, monetized, and sold several sites. I’ve always been interested in reading blog income reports from other bloggers and niche site owners for inspiration, ideas, and just because I’m somewhat nosy.

I’ve decided that I’m going to start sharing my own niche site portfolio income report for those who want inspiration, ideas or are just somewhat nosy 🙂

I’ve been blogging for money since 2016. In other words – prior to 2016 I blogged on Tumblr and Blogspot just for fun and self-expression. I didn’t make a dime from blogging until I realized it was a legitimate way to make money and I wanted a piece of the pie.

In 2020, I sold all of my money-making sites and started again from scratch.

The main reason for this is because, after a certain amount of time working on the same project, I get bored. I figured it was better to sell while they were still making money rather than let them die a slow death because I no longer had the motivation to work on them.

So, in early 2020 I found myself starting all over again, with zero blogging income. (Fortunately, blogging isn’t my sole source of income!)

So that’s my back story, and hopefully, it gives you some insight into where I’m starting from. I’m not a beginner, but I did start completely from scratch just over a year ago.

So let’s get into my blogging income report for August 2021!

Right now, I have a handful of sites but I’m only really working on one. I have limited time to work on my sites and I like to build one up to a decent level of income before I switch focus onto a new one.

I purchased the domain name for this site in April 2020 and this is the main site I’m currently working on.

All of the articles on this site are informational, which is a big part of why the income is mainly from display ads. I do recommend products in my informational articles but because there is no buyer intent when someone lands on an article, they’re less likely to actually buy something.

I started this site in August by moving some articles from my spirituality site over to this one and redirecting the traffic.

Like Niche Site 2, I started this site by moving some articles from my spirituality site over to this one and redirecting the traffic.

It’s too early to see how this experiment is going, but both sites are getting impressions in GSC so that’s always a positive.

The only reason I’ve included this site is that it’s an example of what can happen if you choose a niche that you have absolutely ZERO interest in. I started this site a year ago because I thought it could be a profitable niche (and it could be!) but it is literally THE most boring topic and something that I actually can’t stand…

For that reason, I can’t even force myself to work on it and as such, it’s sitting there doing nothing. However, I have had a few random Amazon sales over the past year which is always a nice surprise. I’m considering selling this as a starter site, to be honest, just to have it off my shoulders.

I started this site in August too, mainly because I wanted to do something fun. I find this particular niche super fun so working on it isn’t as much like work for me.

Having said that, I’m still focusing most of my current energy on Niche Site 1 as that’s what’s making the most money right now.

I’m a one-person band over here and I try to keep my expenses as low as I possibly can. I don’t like to waste money on a bunch of tools that I don’t really need and I do basically everything myself.

As you can see, by far my biggest expense is Jarvis.ai. I purchased this to try out and I’m going to see if I feel like it’s worth the price. I’ve seen some interesting comments floating around the internet about people who’ve allegedly created entire sites using solely AI content from Jarvis and they’re apparently getting some impressive results. Intriguing.

I can go days without working on a site so I’m pretty happy with this income. I would say on average, I work about an hour a day so that averages about $62.73/hour.

I also have lots of other responsibilities so even if I wanted to, I just don’t have the ability to spend 10 hours a day working on my sites.

Do you have any questions about this August 2021 blog income report? Leave them in the comments below 🙂