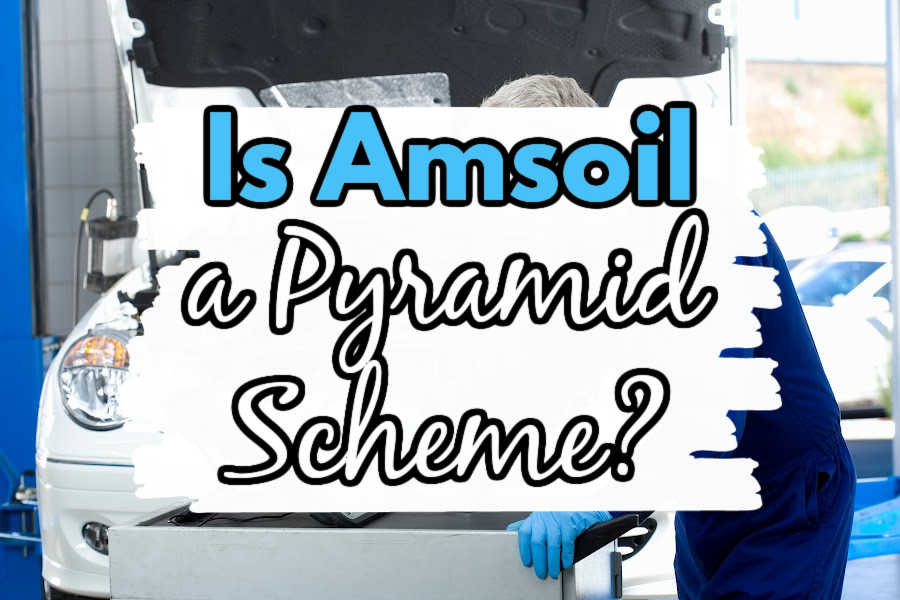 If you’ve been approached by an Amsoil dealer offering you the opportunity to “run your own business,” you may have found yourself wondering; “is Amsoil a pyramid scheme?”

Amsoil tends to fly under the radar when it comes to multi-level marketing companies as most MLM’s tend to target women. However, there are a growing number of network marketing companies targeting men – read on to find out if Amsoil is one of them.

Best For: Amsoil owner and those at the top dealer rank

Summary: Amsoil is a multi-level marketing company founded in 1969 by Albert J. Amatuzio. Amsoil started by selling synthetic motor oil and later expanded to a full product range including fuel additives, synthetic lubricants, filters, and more. The products are sold solely by Amsoil dealers and cannot be purchased from retail outlets.

Is Amsoil a Pyramid Scheme?

Amsoil is not a pyramid scheme. However, Amsoil is a multi-level marketing company, which means it does have several characteristics similar to pyramid schemes.

According to Investopedia, multi-level marketing (the business model under which Amsoil operates) is a legal business practice as it involves the sale of tangible goods. (1)

Is Amsoil a MLM?

Amsoil’s income disclosure is not available to the public, so unfortunately it’s not possible to see how much money the average Amsoil distributor makes.

While we’re unable to view Amsoil’s income disclosure statement, it’s important to remember that the vast majority of people who join an MLM make no money, with most people actually losing money.

According to a Federal Trade Commission study on MLM companies:

“…the vast majority of commissions paid by MLM companies go to a tiny percentage of TOPPs (top-of-the-pyramid promoters) at the expense of a revolving door of recruits, 99% of whom lose money.” (2)

Based on the above, it’s safe to assume that most Amsoil dealers make very little – if any – money.

Why is Amsoil Not Sold in Stores?

Amsoil is not sold in stores because they are a multi-level marketing company and their method of distribution is through Independent Amsoil distributors.

Like virtually all MLM’s, selling their products in stores would greatly reduce the sales opportunities for distributors, as many people would bypass the distributor and purchase directly from a store.

Do Amsoil Distributors Have to Recruit People?

Amsoil distributors are not required to recruit people or “build a downline”, as it’s referred to in the network marketing industry.

However, Amsoil distributors are encouraged to sponsor other dealers with Amsoil stating that doing so will “help to grow your income.”

Amsoil products have generally positive reviews online. However, it’s important to note that many reviews are written by Amsoil distributors who of course, have a vested interest in promoting Amsoil.

In addition, having good quality products does not exclude a company from being an MLM. MLM simply refers to the business model the company employs – it does not speak to the quality of its products.

Should I Become an Amsoil Dealer?

If you disagree with the predatory tactics employed by many MLM companies then it’s best to avoid becoming an Amsoil dealer.

In addition, as mentioned earlier 99% of MLM recruits lose money.

Amsoil is an MLM much the same as other MLM’s like Monat and Modere. They recruit people to sell their products, offering a commission and encouraging distributors to sign up recruits under them.

The higher you move up the pyramid, the more money you stand to earn. Unfortunately, unless you’re at the very top of the pyramid (which is most often a result of being an early adopter and getting lucky) your chances of making money are extremely low.

1. Andrew Bloomenthal. May 7, 2020. What is a Pyramid Scheme? Retrieved from https://www.investopedia.com/insights/what-is-a-pyramid-scheme/